"Be the change you wish to see in the world"

In the last two years, nineteen year old Tia has aged out of the foster care system, begun working on her college degree, become a mother for the first time, lost her housing, then moved into her own place for the first time with no furniture and few resources.  We matched Tia with Henecia in a mentoring relationship in January 2011.


We recently asked Henecia to write about her experience mentoring Tia through Trusted Mentors.  This is what Henecia had to say:

""The difference between a successful person and others is not a lack of strength, not a lack of knowledge, but rather a lack of will."  Vince Lombardi."
"I've often used this quote when I've prepared for various stages of my life.  I've even used the quote to inspire and motivate others.  However, my experiences with Trusted Mentors have provided a true meaning of those words for me and have fueled my passion to help those who desire to help themselves.  As I reflect on the amazing will of my mentee and the mentor/mentee relationship, two words come to mind: Mutualism & Impact."
"In science, mutualism describes a symbiotic relationship in which both organisms benefit from the relationship. I remember when I told my family that I had decided to become a mentor with Trusted Mentors, everyone had a similar response.  They all expressed that with my varied life experiences, education, international travels and time served as a military police officer, I would be an inspiration for my mentee."
"However, as it turns out, it is she who has inspired me.  So many people assume that the mentor is the one who inspires; but the tenacity, hope and determination of my mentee, Tia, inspires me every day."
"From the moment I met her, I have been influenced by her enthusiasm, optimism, diligence and determination. Tia epitomizes the concept that it doesn't matter how you start, hard work and endurance can overcome any obstacle."
"I have found that mentoring is the personification of Gandhi's famous quote, "Be the change you wish to see in the world."  It is through mentoring that an avenue is provided to impact the world, one person at a time.  Every life experience can be used to positively impact others."
"As our relationship grows daily, I am excited about the amazing opportunities that lie ahead for Tia and I.  My life has definitely been enhanced by my participation with Trusted Mentors, and I would recommend being a mentor to anyone who wants to make a difference in their community."
If you would like to learn more about our organization, becoming a mentor, or supporting us financially, please visit our website:  www.trustedmentors.org 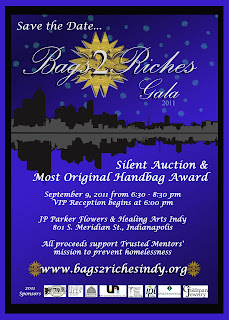 The True Face of Homelessness

The True Face Of Homelessness
As a not-for-profit professional, I am new to the homeless prevention side of things.  So over the course of the last six months I have been trying to wrap my head around the TRUE face of homelessness.  What is the reality, not the stereotype, of the homeless?  How does it happen?  How do people end up on the streets?
People have many preconceived notions about what the face of homelessness is; I know I did.  The stereotype is the dirty person on the street shaking a cup or pushing a shopping cart filled with their possessions; the man or woman under the bridge sleeping on a cardboard box.  We usually assume there is some sort of alcohol or drug problem, some level of laziness or mental instability that caused these people to get there.
Last week I had a friend that, for all intensive purposes, was homeless for a week.  He did not end up sleeping in his car or on the streets because he had friends and family in the city, and a stable job.  However, his circumstance got me to thinking that if he did not have a support system around him, and a couple of circumstances had changed, he could have found himself sleeping in his car; or as Chris Farley on Saturday Night Live so eloquently liked to put it, “Sleeping in a van, down by the river!”
What if he were in a different city with no friends or family around?  What if his car broke down and he couldn’t make it to work and got fired?  What if he had a criminal history and couldn’t find another job quickly in this economy?  What if he started drinking more due to the stress and got arrested?  His possession in storage got seized and sold because he couldn’t pay for the storage unit?
Now all of a sudden this average man is in a city with no family, no transportation, no job, few possessions, and quickly dwindling options.  What can he do?  What would you do?  Does the average person know how to survive this?
This is the reality that many lower income families and individuals face.  Usually living paycheck-to-paycheck with little or no healthcare, few if any family or friends with the resources to fall back on; many people are just a few bad circumstances away from being homeless: the loss of a job, an unexpected illness, a death in the family, etc.  This is how an estimated 7,000 people find themselves homeless here in Marion County (Indianapolis, IN) every year; up to 1500 on any given night.
Working families staying in hotel rooms long term because they have an eviction on their record so no one will rent to them; people sleeping in their cars because they have no family or friends that can take them in.
This support system is the small thin line that separates many of our citizens from having a bed to sleep in, a roof over their head, and a place to take a shower, from those on the streets.
So the next time we see someone on the streets, let’s not assume we know what they’ve been through, or why they are there.  Let’s not assume that if we were placed in their circumstances that we would make better choices.  We never know what would happen until we’re in that situation.
It turns out, the true face of homelessness may not be that much different from our own.
Posted by Trusted Mentors Inc at 9:49 AM No comments:

Trusted Mentors, Inc. will be holding their first annual Empowerment & Eggs professional networking breakfast on Thursday, April 28th, 2011 from 7:30-9:00 a.m. at Conseco Field House.
Empowerment & Eggs will feature three speakers that many local business people and entrepreneurs will recognize; including:


Michael (Mickey) Maurer, Chairman of the Board for the Indianapolis Business Journal Corporation;
Ali Sales Roach, co-founder of Compendium Blogware; and Kemba Smith Pradia, nationally recognized and award winning speaker, and founder of the Kemba Smith Foundation.
The theme of Empowerment & Eggs is the power of mentoring in the lives of adults.  Over 70% of executive level business people say that they have had a mentor in their lives that has helped them achieve their goals.
Trusted Mentors’ mission is to provide volunteer mentors to adults at-risk of homelessness, ex-offenders re-entering society, and young adults aging out of the foster care system.  In 2010, 86% of the adults in Trusted Mentor’s program remained house; while 81% of ex-offenders remained out of the prison system.  Trusted Mentors is the only organization in Indianapolis that provides mentors for at-risk adults.
Businesses interested in sponsoring Empowerment & Eggs can do so at levels ranging from $500-$5,000.  Individual tickets can be purchased for $40.  All proceeds will go directly to Trusted Mentors to fulfill our mission of preventing homelessness through the power of mentoring.
For more information, to purchase sponsorships, or individual tickets, contact: Jeri Warner, 317-985-5041; jwarner@trustedmentors.org.
####
About Trusted Mentors, Inc.: Founded in 2003 as a result of the Indianapolis Blueprint to End Homelessness, Trusted Mentors uses the power of mentoring to help stabilize the lives of adults at-risk of homelessness, ex-offenders re-entering society, and young adults aging out of foster care.  We are one of the first organizations nationally using this model for homeless prevention and ex-offender re-entry, and the only organization in Indianapolis to provide mentors to at-risk adults.  Since 2003, over 80% of adults working with Trusted Mentors have remained housed while in their program.  www.trustedmentors.org; @Trustedmentors
Posted by Trusted Mentors Inc at 11:28 AM No comments:

The Power of Mentoring

~The Problem~
In January 2010, a documented 908 men, women and children were on the streets or in shelters in Indianapolis; with a 58% increase in the number of homeless families from the previous year. Homelessness has a deep impact on the physical and emotional health of the adults and children who experience it, which goes far beyond the obvious reality of not having a place to call home. Marion County spends up to 6 million dollars per year on the chronically homeless in health and criminal justice costs.


In 2009, 5,668 ex-offenders were released from Indiana’s prisons and jails into Marion County, at an annual cost of $27,000 per offender. Studies have shown that employment is the #1 factor attributed to re-offending; 85% of new offenses take place when the individual is unemployed.


~A Part of the Solution~
In 2003, the City of Indianapolis unveiled the Blueprint to End Homelessness. This ten year plan set the goals of increasing supportive housing, expanding prevention services, and moving the focus from emergency responses to lasting solutions.


The Blueprint to End Homelessness outlines mentoring as one of the key strategies to achieving the goal of ending homelessness in Indianapolis; and the numbers have proven that the Power of Mentoring is effective.
In 2010, Trusted Mentors supported 85 mentoring relationships, with 86% lasting more than 6 months. Program participants had the following results:
As you can see, the presence of a mentor in the life of someone at risk of being homeless has a profound effect. As 2011 begins, we are proud of the successes that we have had over the past year, and look forward to the relationships that we will help build in the coming year.


If you would like to learn more about our programs, or are interested in volunteering, please do not hesitate to Contact Us; or visit Our Website.
Posted by Trusted Mentors Inc at 8:49 AM No comments: