Mentor Musings-A Coming of Age story as one mentor comes to terms with her role in "world changing" or not...


After meeting with Erin for an hour at Yat’s for her mentor interview, I asked her to kindly share her story by being a guest blogger for the month of October. I think you’ll enjoy hearing about her life, her adventures, and her “lessons learned” from being in AmeriCorps, the PeaceCorps, and now a Trusted Mentor. Welcome Erin to Trusted Mentors!


I am about to become an official Trusted Mentor, and I want to be honest and straightforward right off the bat-- I am not here to change the world. And neither should you be.


If you looked at my resume’, you might think I was lying to you: AmeriCorps, Peace Corps, ESL Tutor, Refugee Youth Mentor, and the list goes on in an almost embarrassing volunteer, superbly hippy-like manner. It may seem like I’m trying to change the world- and make it a better place, a more peaceful place. I am not.


Again, I am not here to change this world. And if I were to really think I could, I never would. Here are some examples of how I came to this seemingly despairing point of view.


I was born and raised on an organic vegetable farm. My parents were the only organic vegetable farmers in probably all of Indiana, and nearly the Midwest. They farmed organically long before farming organically was cool. I guess you could call them the “hipsters” of the agriculture scene. So, like anybody that does something against the grain, they fought hard to prove that “being green” is beneficial to our bodies and our environment. Some people even believed organic foods were more likely to kill people!  The core belief behind their growing dictated they could not change the world-in this case, the world representing nature. They could not manipulate and make Mother Nature better. Rather, they wanted to work with it.


A quick example is the potato beetle. For years, this beetle ravaged our crops. They could have used a quick-acting pesticide, but instead they picked and killed those beetles by hand. But they made sure to leave all natural predators such as the soldier beetle. Several years later, the population of potato beetles balanced out. Good bugs AND bad bugs. They built a relationship with nature, and made themselves stronger farmers with stronger soil and plants in order to withstand her furies, and always be able to enjoy her pleasantries. My parents did not try to manipulate nature but work with it to create a balance. This philosophy played a large role in my outlook on the world. I can’t change it, but I can work with it.


First, I thought college represented intellectualism and activism- putting our cerebral capacities to work and solve the world’s most horrendous human rights abuses. However, many students found their peace in red cups and football games. Theatre, Anthropology, and Peace Studies rolled up into one stressed-out, fed-up Butler University Student. (That would be me.) Human rights classes, social activist theatre pieces, and studies abroad in India, South Africa, and Russia helped to develop my keen eye for injustice and a stronger desire to change the world. However, change kept coming up short.


I decided to dedicate a year of service to underprivileged youth on the south side of Chicago. Again, idealistically, I believed only the selfless would work for AmeriCorps and our presence, obviously the sum greater that its parts, would create drastic change in these young lives. Well, my objective Anthropology courses and continual idealistic failures finally started to kick in-I cannot change the world, and neither can anybody else.


Inspired by my co-team leader and her simple brilliancy, I truly understood my White Savior Complex. Co-Team Leader being an African-American woman, she called out my pity feelings and sad thoughts for our students and the societal abuses they endured. The responsibility lay in my hands. And those young students had their own responsibilities. My AmeriCorps team held their responsibility, too. I could not make them better workers or more understanding white people. Similarly, I could not make my students avoid a life of violence. I could, however, control my behavior and reactions to the people and life around me. I could be a friend. An equal. I could not feel sorry for others, believing- innately, implicitly, secretly- I was better somehow.


So, I tried it out some more in other volunteering venues. I mentored refugee youth sisters and tutored adult ESL students. These one-on-one meetings created a world of equality between teacher/student and mentor/mentee not previously understood. I got rid of end goals, better worlds, and concrete successes. I exchanged it for giggly moments, shared meals, and honest conversation. I exchanged changing the world for making friends.


Peace Corps! Funny thing about the Peace Corps- most people believe it the essence of world changing. How wrong they are! Any volunteer who believed such madness hated their service.


Luckily, my previous mistakes equipped me with the power to not care about changing the world. For a good six to eight months, in my small, non-electric rural community, I hung out. Chilled. Learned a new language, participated in many dance parties, and met new people-mainly by eating their food, drinking their tea, and taking naps at their houses. Turns out, not changing the world made that stressed-out Butler student float right away.


Through this process, I made a habit of building very strong relationships; one of the strongest was with my host mother, Jeynaba Lo. She took care of me like I was one of her own. In fact, she continues to tell me I am one of her children, and always will be. This woman is tough. I am talking cement, steel, and platinum all combined together tough. She barely reaches five feet, over fifty years old (life expectancy at fifty-nine), and she could grab my fifty-pound pack and haul it on her head through an entire flood plain. She don’t play. Tough.


But, let me be clear: this woman, and this village, suffered daily.  Every month I went to a funeral. Babies died from hunger. Jeynaba suffered immense loss as her brothers and friends passed away too young for many U.S. citizens to fathom. Jeynaba struggled every day to make sure rice filled the lunch AND dinner bowls. Jeynaba ran a household of men, one of whom, her son, would beat his wife if Jeynaba left the house. I’m ranting. But I am talking about real-life problems. Things that should make you feel sorry for people, and then want to change the world.


But I never felt sorry for her. Nope. Not for a second. I worked with her on most projects I executed in the community. We worked in the fields together every week. She taught me how to plant sweet potato, how to harvest hibiscus, and the best way to eat a fresh watermelon-by shoving your face in it, obviously. After eight months or so, I began to teach her some things-improved spacing, composting, and soil amendments. These teachings were simple conversations, an honest exchange of ideas. Months later, I discovered Jeynaba conducted her own test plot of techniques we discussed. She witnessed their success first-hand. She was thrilled-due to her relief that she was not wasting her time on some crazy white girl. That I might have a thing or two in my stringy-haired head.


Life continued. We ate more rice. Worked more fields. Exchanged more ideas. One moment stands out in particular. We were working in her field, and I believe we were arguing over spacing of trees. I had my reasoning, she had hers. She got crazy frustrated, and called me stubborn. I paused, in shock and awe, and called her stubborn right back. She said, “Well, I guess that’s finished.” We laughed so hard as we took the long walk back to our huts. Just two stubborn women trying to make some crops grow and fill those rice bowls.


Jeynaba’s stubbornness paid off. She convinced the entire women’s garden to discontinue the use of chemical fertilizer. She got nasty about it too, doing the “I told you so’s” every time a woman experienced bad crop production. A year and half into my service, I had farmers from other villages coming to ask me questions about their crops, seeking advice. I would give my five to ten minute lecture. Then, Jeynaba would step in and hold an hour-long conversation with the newcomer. I was no longer useful. Doubtful if I ever really was.


Jeynaba owned her knowledge. She owned her change and her community’s change. I owned none of that. I owned Jeynaba’s friendship and deep love and she certainly owns mine. We worked together. I did not solve the rampant hunger in that community. But I know my world, and Jeynaba’s worlds were drastically altered due to our relationship and our mutual stubbornness.


Being a Trusted Mentor


I am back in the United States. I finally have a job that pays me some money to do the work I have been doing for years. Alas, social work in the United States is no Peace Corps. We must meet numbers, and work with too many people with a sincere lack of resources. I do my best to build relationships and to create grounds of equality with my clients and myself. I sought Trusted Mentors to help build that strong connection I uncovered in Senegal, here on my own turf.


An individual cannot teach another without mutual learning, respect, and partnership. We work to build each other up, not to lower our hands and lift others up. I cannot change the world. But I can be a friend, a loved one who loves others. True mentorship, for me, is mutual. Only then, can we start to mitigate the wrongs we so often see in our world.

Posted by Trusted Mentors Inc at 8:12 AM No comments:

Spend the Evening with Trusted Mentors! 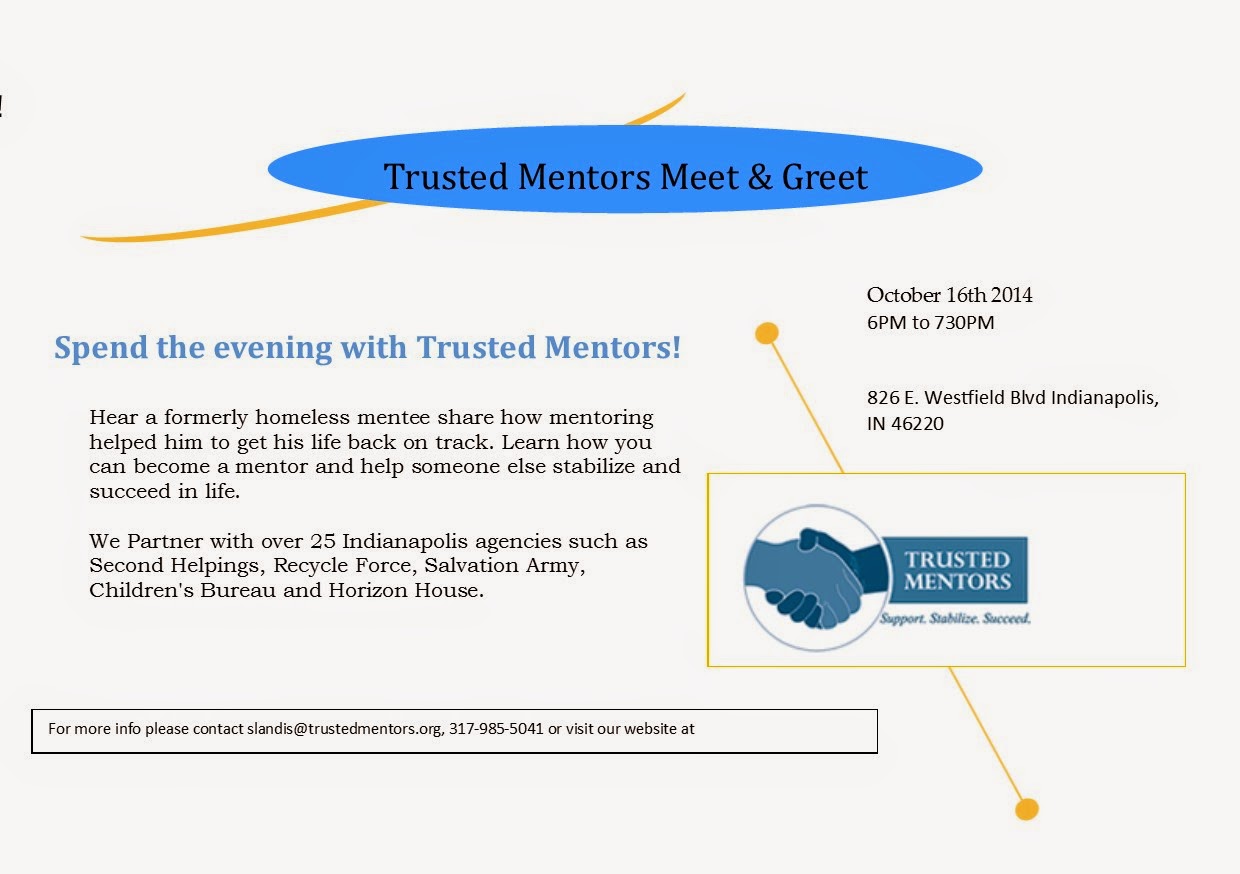 Posted by Trusted Mentors Inc at 9:49 AM No comments: