The Power of Trusted Mentors 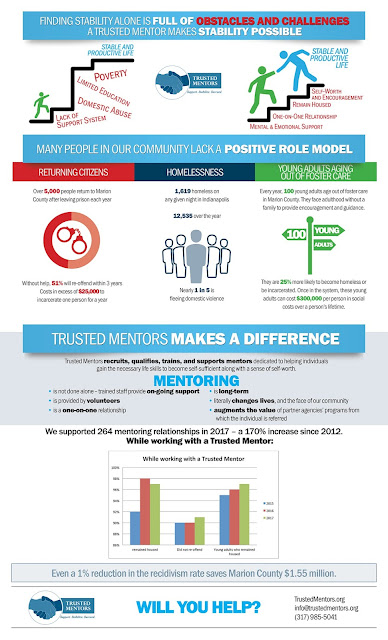 Posted by Trusted Mentors Inc at 8:08 AM No comments:

John entered the Changing Lives Program unsure of what he was in for. He felt like quitting in the first two weeks, but  his fellow investigators encouraged him to stick with the course because they saw something in him.

Before entering the program, John had experienced homelessness, unemployment, incarceration and addiction. He wasn’t sure that his life would change by taking Changing Lives course but he stuck with it anyway. John was surprised to find a sense of community among his fellow investigators, who had also been impacted by many of the same challenges. Together, they graduated from the 18 week course with more knowledge about how poverty had impacted their lives and  resources they could use to get ahead.  .

“And then I became matched with my mentor”, John said. John and Gary were matched as a mentee/mentor pair on the date of John’s graduation. 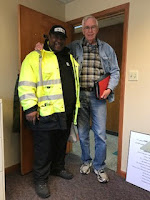 Gary, who is retired, had tutored young people his whole life and had never mentored an adult. “When I first came to the program, I didn’t know how helpful I could be in mentoring adults because I was unsure of their ability to change at this point”, Gary stated. He adds “Out of all the mentoring and tutoring programs I’ve done, Trusted Mentors is the best”.

As Gary started mentoring John, Gary did in fact see the changes that John was able to make in a short period of time. John found employment at Mission 27, a retail store for St. Vincent DePaul, and he is well-liked by fellow co-workers, volunteers and customers. John has stable housing and for the first time in his life, attends church. Gary and John meet every week and always end their session with prayer.  “Gary is like a mentor, a brother, a friend and a father”, John stated with tears in his eyes. Gary shared the same sentiment about John, saying that he treats him as one of his own children.  John and Gary continue to build a positive relationship.

Both have been transformed by the power of mentoring.